Two years after this episode in which Michael Selsor grants his only interview, Josh Rushing returns to watch Selsor die in an unflinching look at an American execution.

"Anatomy of an American Execution", 2012. I came to Oklahoma to witness a killing, a homicide in fact.

At a microphone Debbie Huggins fights tears and with a strong southern drawl says slowly, emphatically: “What we did to him today was much kinder than what he did to my dad.” Him refers to Michael Selsor and what to the murder of Clayton Chandler, a clerk shot six times during a gas station robbery in Tulsa, Oklahoma. Selsor pulled the trigger even after Chandler had complied and volunteered the loot. “In 1975 I never would have thought that it would take 37 years for justice,” Huggins says.

Today’s justice was delivered about half an hour before Huggins approached the microphone; it’s why I am here. There are few acts graver than when a government takes the life of one of its own citizens. Executions often get a lot of coverage in the US, when there is something controversial about the case or enough people believe the condemned might be innocent. These scenarios attract media attention and fuel vigils. This was not the case with Michael Selsor. Everyone agreed that he did it, including him. The reporters who cover Selsor’s execution will focus on Huggins and her family. Perhaps you cannot blame them. The only interview Selsor ever granted was to me.

Even though executions are conducted on behalf of the citizens of the state, very few are allowed to witness it: families of the condemned and their victims, lawyers, law enforcement, and journalists. This is why I felt a responsibility to witness Selsor’s end and then to report it as dispassionately and honestly as I could. The following attempts such an account.

About an hour before Huggins gives her statement, I am led from a makeshift media center to the notorious H Unit, home of Oklahoma’s death row. A pat down ensures our escorts that I carry no possessions other than the clothes on my back. They give me paper and a pen so I can take notes. I am joined by five other reporters. We maneuver through a set of gates that open to a large passageway. The walls and floor are made of smooth concrete. The passage feels stark, modern, like a secret missile silo – and incongruous with the century-old prison famous for inmate rodeos and executions.

Eventually we turn through a large yellow door into the death chamber’s viewing room. I have been here before, but then the space was empty and part of the tour – now it is ready for business.

A handful of prison officials and guards are waiting for us in the viewing room, a narrow rectangle about four times as long as it is wide. A long series of windows to my right are covered by drawn blinds. Two rows of 12 brown metal folding chairs – the kind dragged out of a storage closet at a church picnic – are lined up. I am the first reporter in the room and told to go to the end of the second row and take a seat.

As I sidestep down the row I notice for the first time another set of windows on the left side of the room. The tinted panes conceal the identity of those on the other side. I suppose the setup is not unlike a wedding with two families to attend to and keep separated. The original victim, Clayton Chandler, is represented by an unknown number of family members behind the dark glass. It is hot in the room – feels like at least 90 degrees and rising as people file in. Movement behind the opaque windows catches the light and my eye; at least two people are fanning themselves with white paper. Chandler’s family members must already be in place, watching us nervously find our seats.

Three lawyers in dark suits representing Selsor enter next and sit directly in front of me. Selsor’s family follows. His son wears a grey t-shirt, shorts and a military-short haircut. Tattoos cover his neck and arms. Selsor’s sister, with a shock of blonde hair, looks tired. Her bright blue, short-sleeved shirt contrasts a suntanned face, wizened beyond her years. A box of cheap tissues rests in the son’s chair, courtesy of the state. Once Selsor’s family is settled, a small contingent of law enforcement file in, including Jeff Jordan, who investigated Chandler’s murder as a rookie homicide detective. He is now Tulsa’s chief of police.

A cacophony of banging echoes throughout the prison. We have been warned not to be alarmed by the noise – it’s how inmates say their goodbyes. Selsor is respected on death row. He is seemingly regarded as a serious and contemplative individual who became an asset of sorts to prison inmates and staff alike – though officials always caveat the sentiment with a reminder that his crime was inexcusably wrong and such actions must bear consequences. As the run guy, a job given to the toughest of the condemned, Selsor made deliveries to other cells and kept fellow inmates in line. When school children visited the prison, Selsor played a regular part in the tour. From behind bars he shared his life lesson about the consequences of one’s actions with the children.

The appointed time nears and the banging becomes rhythmic – quick at first, but slowing now to a steady, dirge-like pace. I can feel it in my chest.

The director of Oklahoma prisons, Justin Jones, who has twice appeared on Fault Lines, enters. The yellow door shuts behind him. Rather than taking a chair, he is handed a phone, a hotline to the governor’s office. Though not far from me, I cannot hear what he is saying. Jones hangs the receiver up, picks up a different phone connected with the execution chamber and tells them to proceed.

It is exactly 6 pm local time. The curtain goes up as guards raise the mini-blinds inside the execution chamber. Selsor’s family in front of me gasps at the sight of him. He is strapped to the bed with his arms padlocked down and covered in a sheet up to his chest. Selsor’s pinched eyebrows convey a look between fear and guilt.

The son waves to his father for what turns out to be the last time and reaches for the tissues. The son and sister begin to cry. Selsor lifts his head as much as he can and turns toward his small audience: “My son, my sister, I love you ’til I see you again next time. Be good. Eric, [Selsor’s lawyer] keep up the struggle.” His eyes scan the viewing room: “I’ll be waiting at the gates of heaven for you. I hope the rest of you make it there as well.”

He turns his head toward the prison official standing over him and says: “I’m ready.” Relaxing back to the bed, he turns his head to the side and focuses on his son. Though we cannot see it, we all know what is happening now. Two intravenous lines run from Selsor’s arms to two holes in a wall about three feet behind his head. From a hidden room, three executioners each press a plunger sending lethal doses into his veins: one with pentobarbital, another with vecuronium bromide and a third with potassium chloride. The executioners are each paid $300 in cash, so no paper trail leads to their identity. With a tilted head still looking at his son, Selsor’s gaze begins to fade, his eyelids half closing. A final breath exits his body with a visible puff from his lips. His body stills, eyes half open and locked on his son. It is roughly 6:03 pm.

Three more minutes pass painfully slowly. No one moves in the death chamber or viewing room. I hear barely perceptible sounds of crying from the row in front of me. A medical examiner in the chamber approaches the bed, checks for signs of life and pronounces Michael Selsor dead at 6:06 pm.

We solemnly return to the media center. Huggins holds a press conference and tells us that the execution did not bring closure or the kind of justice it seems she was seeking, but it is easy to see her relief from the death of Selsor. The ultimate boogeyman in her mind was finally gone. In time a death certificate will be issued from the state of Oklahoma. For cause of death, it will say Selsor died from a homicide. Though it took nearly four decades to find its target, it is clear now that the trigger Selsor pulled that fateful day in 1975 ended not only Chandler’s life, but his own as well.

I don’t think a government – whether it’s capitalist, socialist or communist – should have this kind of power over its subjects. This is making the government a demagogue or a God status, to have the power of life and death over an individual. Whereas I think a government’s function is to upraise mankind, not downtrodden, you know? 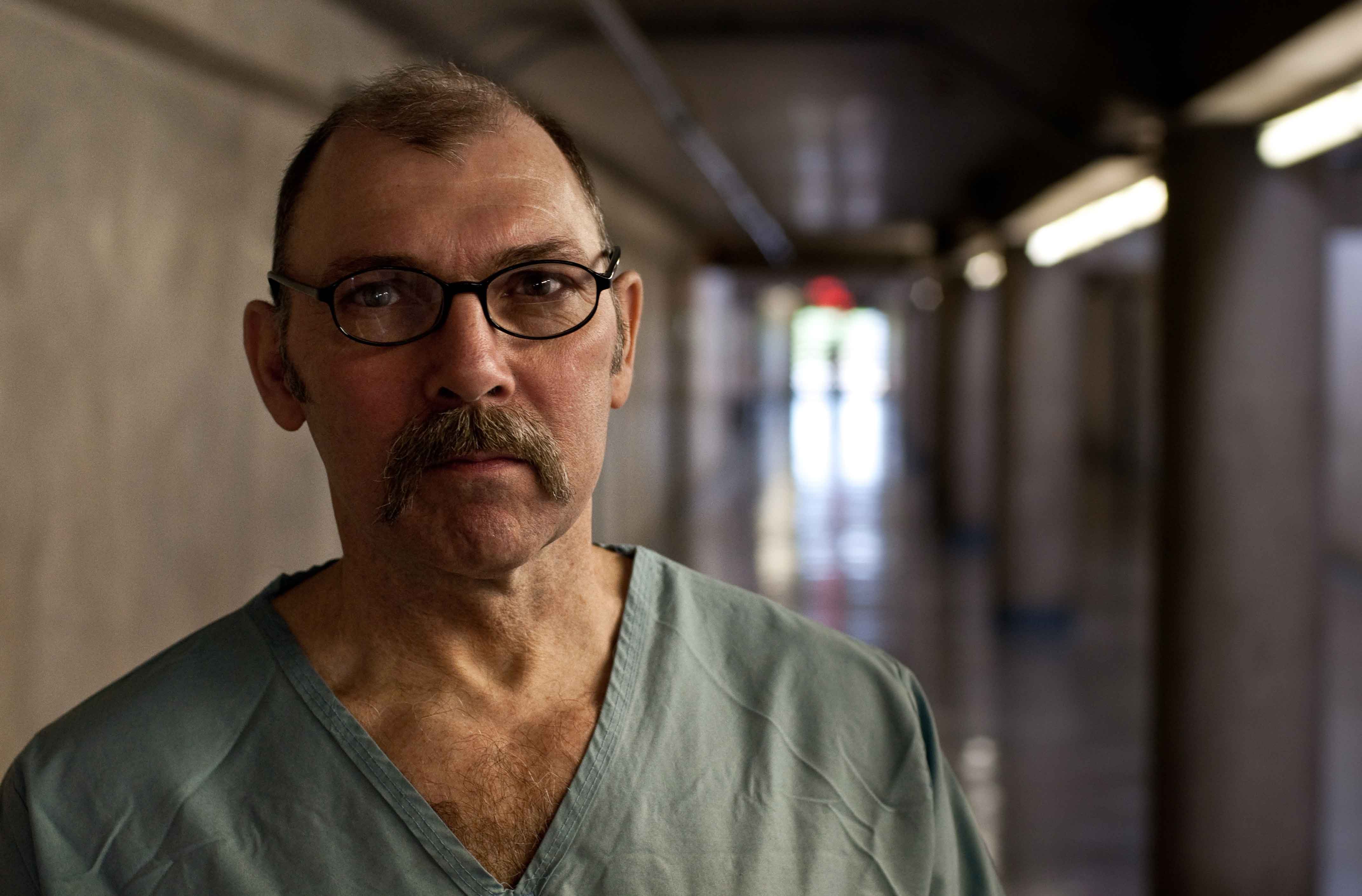 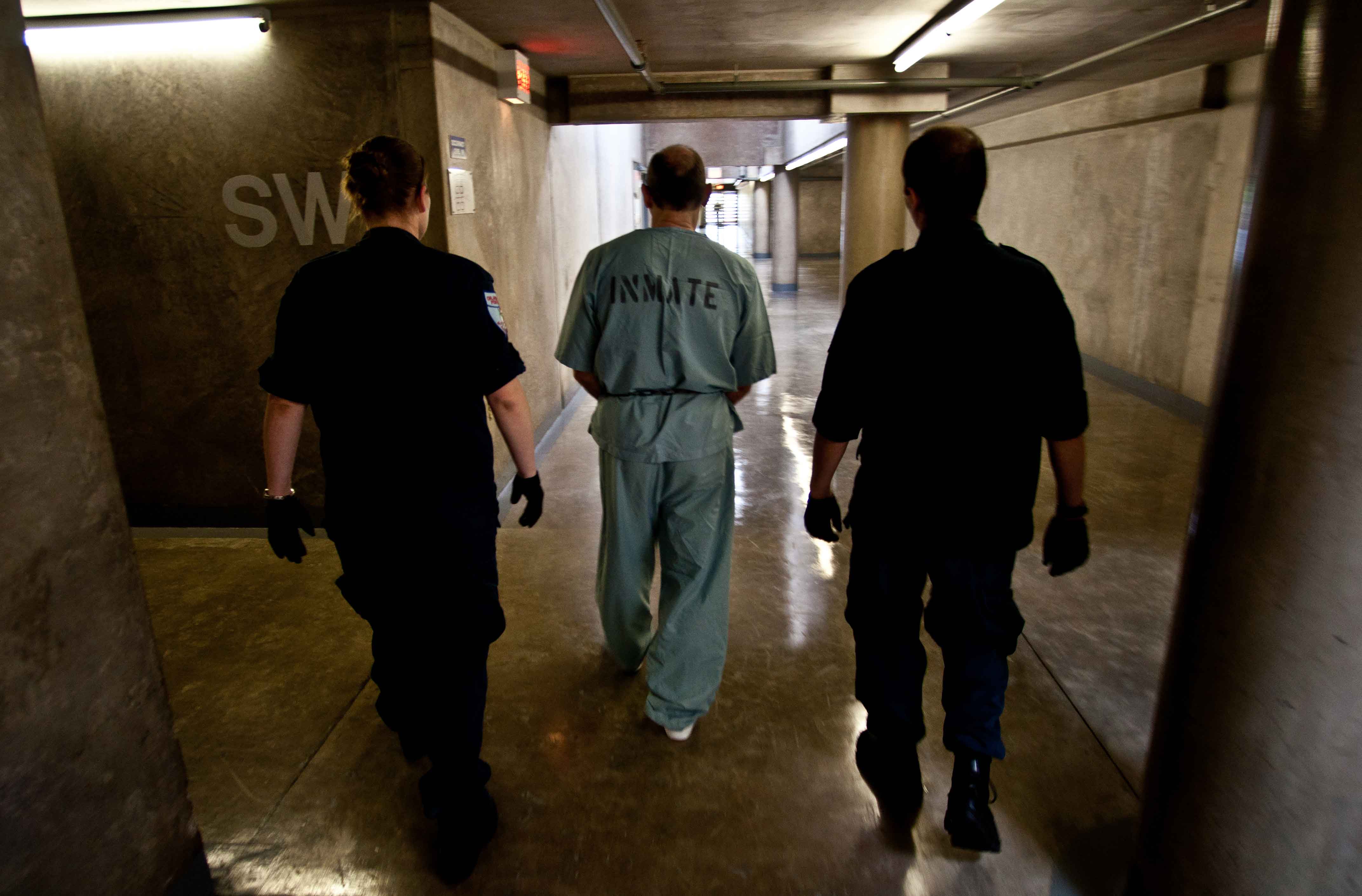 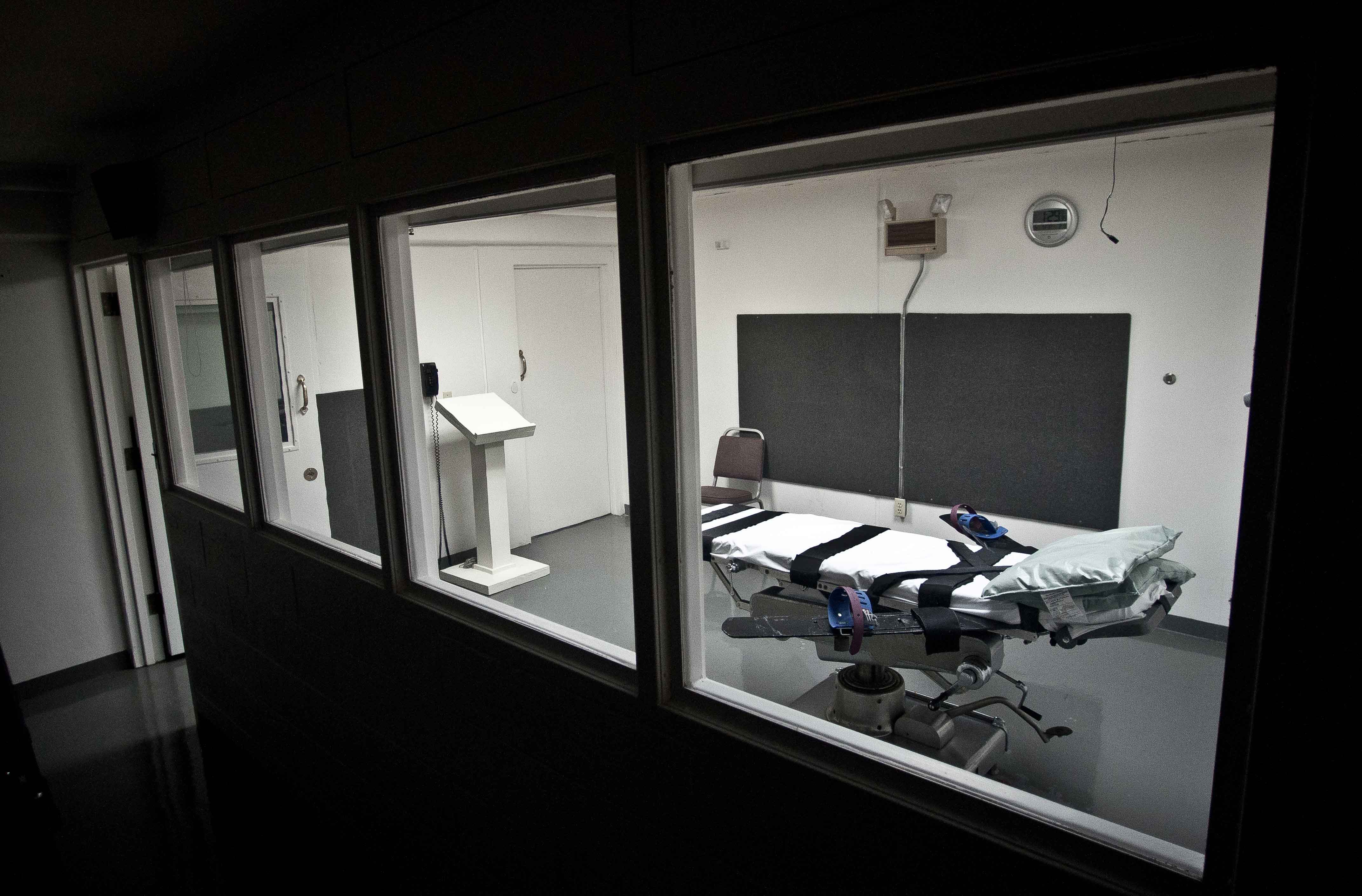 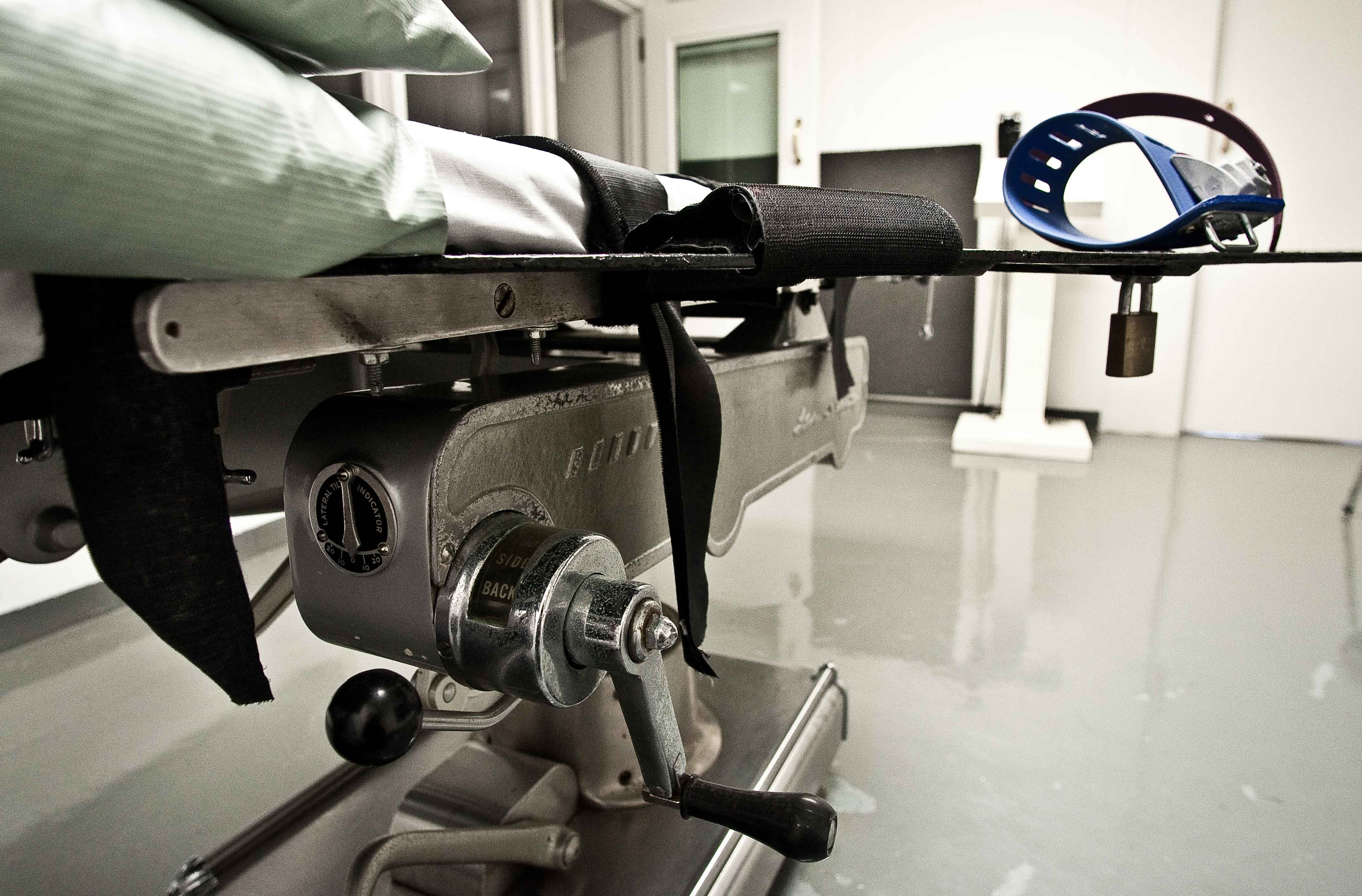